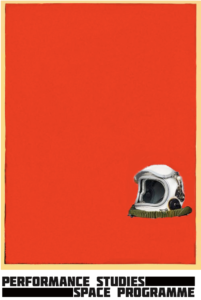 The Performance Studies Space Programme (PSSP) seeks to articulate the interplay between astronomical and cosmological disciplines with performance and media theory and practice. Convened by Maaike Bleeker and Felipe Cervera, the Programme enables interdisciplinary encounters between these seemingly divergent disciplines with the objective of debating variable onto-epistemologies of time and space vis-à-vis the materiality of artistic, cultural, and scientific performance practices. To this end, the Programme considers three lines of investigation:

These three lines of investigation map a topology between performance research and astronomical/cosmological disciplines and their methods. Addressing the possibilities of that topology, PSSP exists alongside other great efforts from scholars working in different areas of the humanities, post-humanities and geohumanities in order to articulate the paradigms and criticalities needed to deal with the universe and our place in it: its social production, its military employment, the increasing possibilities of its commodification, its politics, its aesthetics, and, as we hope to investigate here, its performativity.