As Stelarc (2014) rightfully puts in a talk called “Error, function and behaviour”, the term “misbehaving”, as opposed to “malfunctioning”, requires certain intentionality and agency. “Misbehaving”, he proposes, can only happen in the presence of someone, whereas “malfunctioning” could take place in the absence of a person, as it relates to an error in the performance of a certain tasks. We could say, in theatrical terms, that only “misbehaving” then is in need of a spectator. Both terms, however, are linked to a certain anthropomorphisation of the machine, as we are judging its performance in terms of what we consider to be a subversive behaviour (misbehaving) or an unproductive one (malfunctioning). 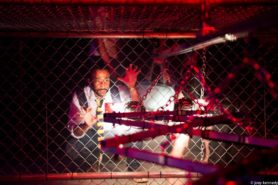 Robotic artists are exploring ways in which machines can move away from parameters of productivity, or expected pathways, and instead connect with their spectators through other means. In this line, the work of Bill Vorn stands out, as he builds large metallic structures equipped with sensorimotor systems that react to their environment in ways that are perceived as dysfunctional. Especially relevant in this regard are his installations La Cour de Miracles or Hysterical Machines. By exposing robots that do not comply with any functional requirement but that engage, on the contrary, on emotionally-loaded unproductive behaviour, such as convulsing, shaking or trembling in interaction with the audience, a new connection with the spectators can take place. Feelings of guilt, of discomfort may start to arise, positioning the participants on an atypical role with regards to robots. 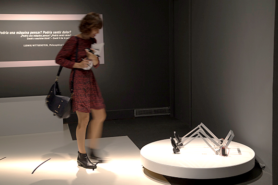 A similar effect is produced by the installation Misbehaving Machines Act-out by Heidi Kumao, where, among other things, two pairs of robotic legs, simulating a 6 years-old-girl, react through proximity sensors to the presence of viewers. One pair (“Resist”) agonises on the floor in a way that reads as both sexualized and fearful. Another pair (“Protest”) stomps loudly at unpredictable times. As the artist herself expresses, these machines, far from complying with a perfect job performance, declare fragility, impatience or disapproval through gestures. In a similar manner as Vorn, these systems, by reacting at times to the audience but not always, create both a feeling of an alien agency that is not fully comprehended and a sense of intrusion in a world to which we do not entirely belong.

This idea of an alien world in which we can only be visitors, and occasional intruders, is what has led several artists to create installations where a robotic environment with its own logics is being displayed. Stefan Doepner and Jan Cummerow, for example, developed Living Rooms in 2006, where a set of household appliances would have their own cycle of functioning, regardless of the people that would inhabit the space. The dynamics that these robotic objects exhibit, then, it is not conditioned by their usability but follows their own interconnected robotic logic. Similarly, FrAgile 6 – Pahoehoe Beauty, by Marian Colletti, Daniela Mitterberger, Tiziano Derme and Georg Grasser, is an environment created by machines (through a 3D printer controlled by robots) that is later on be inhabited and sustained by them. Once the environment has been created, a series of machines with cameras and sensors overlook their creation. Humans are invited, equipped with special suits, to visit that biomachinic area, where their human gaze can co-exist with the machinic gaze. 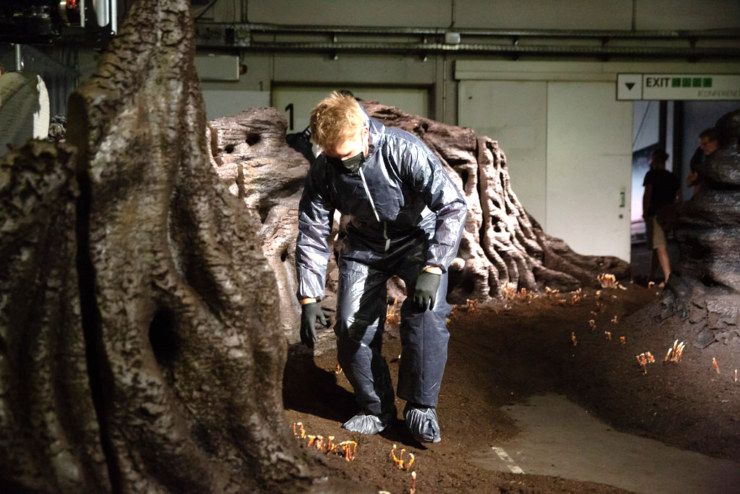 The idea of a robot’s system whose motivation remains somewhat alien, aligns with Paul Granjon’s concept of non-benignity, which he has explored in his own robotic projects. Granjon encourages robot artists and creators to develop machines that do not comply with the principles of friendliness, safety and legibility in order to stablish an interaction with humans. In this way, he argues, it would be possible to explore other forms of machinic life as well as surpass the anthropocentric bias. In Granjon’s account, non-benignity then does not necessarily align with “malign” but instead focuses on abandoning the logics of productivity and servitude that frame human-robot interactions. 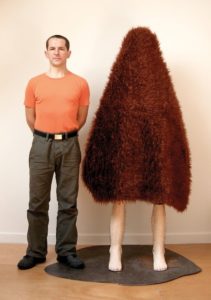 Two of his projects stand out in this respect: Wild Robot Coy-B and Furman. The first one, still in progress, is designed for a durational performance with a human where the robot, representative of contemporary techno-scientific achievements, shares the space with its partner, always enacting the possibility of it being a danger for the human. The latter consists on a six-foot high machine that delivers karate kicks. This robot could virtually be a friendly guardian or a hazard to its creator. Granjon’s creations, as well as the other projects explored in this post, all engage in an exploration of what machines could be outside of human parameters of productivity or appropriate behaviour, and what kind of agency we would be able to co-create together when we meet, instead, halfway in a path of fragility, of intrusion, of danger. Only in this way, as Granjon asserts, “human and non-human agencies can dance freely” (87).