The fact that senses are organised under a hierarchy through which some of them are given more importance is not something new. Throughout history, vision, for example, has held a privilege position, followed by sound, and leaving the rest of senses far behind. In the last years, the humanities have explored what kind of paths could the perspective of other senses open to our understanding of the world, of relations and of ourselves. Among them, touch is a particularly relevant one, especially for philosophical inquiries. The fact that while touching one is experiencing a two-fold sensation where the organ that touches is also being touched has brought interesting considerations with regards to bodily approaches to the senses and our interaction with the environment. From a psychological perspective, however, studies have been more focused on touch’s potential uses for therapy: its calming nature and its emotionally healing effects.

Within social robotics, touch as a therapeutic tool is gaining importance. Here, pet-like robots are the most common ones, as the studies conducted in this field draw from research on the beneficial effects of therapy with animals. The main advantages of using pet-like robots instead of animals in such an environment, then, relies on how caring for a robot is, economically, mentally and physically less costly. One might wonder to what extent substituting the care of a living creature, with which we need to learn how to co-exist, for a robot that merely serves our needs is advisory. However, developments in these therapeutic robots show how the element of care, even if in a different form, it is still present, encouraging the patients to be mindful of the robot’s requirements to function correctly or, we could say, to live their robotic life fully. 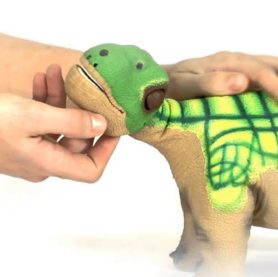 Pleo, for example, with the appearance of a week-old baby dinosaur goes through different learning stages that depend on the input given by the people interacting with it. This interaction happens mostly through several ways of touching, such as petting, caressing or stroking. As it resembles a baby, it requires attention and care: it needs to be fed, it needs people to play with and so forth. Same goes for Paro, the seal-like robot that is being used mainly with the elderly population. For this robot, being stroked and being held are essential factors for its development, its learning and for giving positive feedback. 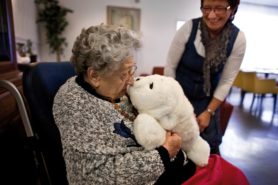 Research on touch as affective movement largely contributes to these projects. As an example, we can consider Rebecca Andreasson et al. (2017) project, which conducted an experiment where people grouped in pairs where instructed to touch each other, recognise the emotions being transmitted and report them. These types of settings allow for an understanding of human affective motion in order to implement it in human-robot interaction. The goal of this study, and others similar to that one, would be then to first focus on how humans interact with robots via touch, what kind of affective responses does that elicit and how can robots learn from the implicit social cues imbued in that affective touch. 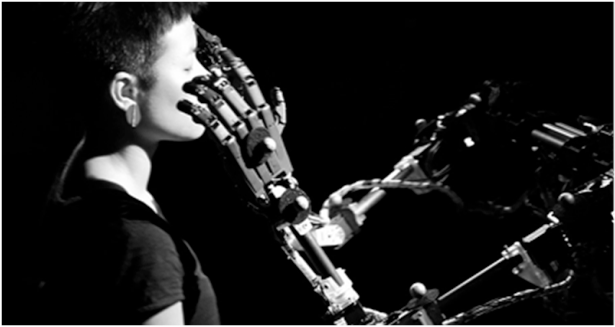 Similar interests can be found in robotic art, where the performative and theatrical aspects of their installations can contribute to a more improvised and atypical exchange between robots and humans through touch. As an example of this, I would like to consider Louis-Philippe Demers performative installation The Blind Robot, where two robotic arms gently touch the audience’s face one by one, simulating a blind person’s way of perceiving someone. The similarity in shape of those robotic arms to an industrial robot, as well as what the name of the installation implies, creates a mixture of fear and compassion that positions the audience in a vulnerable role. The people that are being passively touched by the robot quickly realise how this seemingly dangerous robot is actually engaging in a fragile, imprecise and soft touching. In here, the affective connection established by touch, then, does not only rely on characteristics that are usually not looked for in a robot, but also take functional diversity as a model to create more meaningful connections. The freedom that a theatrical setting, in contraposition to a lab or a social robotics environment, can offer creates a vital point of departure for considering new embodiments, new connections and new marginal approaches to robotics.