“In Search of Lost Places (and Their Histories): Situating and Performing the 1919 Cardiff Race Riots with a Digital Graphic Novel” – Danny Steur

How are histories usually told? Though I am no student of history, I would say this most commonly occurs by chronicling the actions of history’s greatest persons: their remarkable, heroic undertakings, or maybe rather their horrendous activities. Naturally, a wide variety of forms of conveying histories exist, but a remarkable practice that I was unfamiliar with is chorography, described by Andrew McRae as “a distinctive textual form devoted to describing the history and geography of the land” (2015): historiography focused on places and the meanings and histories that permeate them. 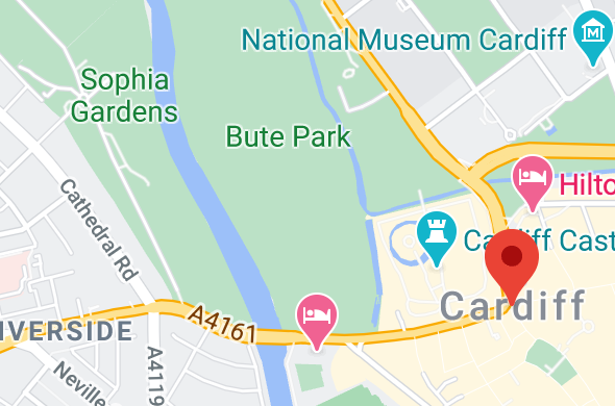 What histories hide behind unassuming appearances such as this? What stories, what people, what events?

Performance scholar and artist Mike Pearson dabbles, with his site-specific performances, in such chorography. Things Come Apart is an example: a work that performatively reconstructs the Cardiff race riots of 1919 – tracing the events of four tumultuous days with an explicit focus on specific locales featured in these events (Pearson 2018). A difficulty with such remembering is that Cardiff’s urban landscape has changed greatly in the past century (Pearson, in the Transmission in Motion seminar of December 16th, 2020). Though traces might still exist, when walking through Cardiff few things might remind us of this history, especially if we do not already know it. Performative historical reconstructions such as Things Come Apart’s artful commemoration might offer a way out of this problem. However, not having attended these performances, we may wonder, how can we keep remembering such histories? Theatre performances are, after all, ephemeral events. Western historiography traditionally requires archiving, a record to remind us of past events. Then again, performance is also an undeniably powerful conveyor of narratives, and may also aid our remembrance of things past. One creative solution to these troubles is offered by the digital graphic novel Cardiff 1919: Riots Redrawn (Legall 2020). This reworking of the Things Come Apart performance presents a recorded chorographic effort that remembers the riots, in a performative manner. A brief explanation of the process of reading the comic may illuminate this point.

Each comic page shows, among other things, a central image, a video, and a fragment of a map. The central images are detailed sketches of the riots, but in themselves do not communicate much narratively. This is where the videos come in: they zoom in on different parts of the image, while the voice-over grippingly narrates what happens in those parts. Eventually, all parts of the image are imbued with the story and the video zooms out to situate these parts within the whole. The main image then contains these multiple stories, and we more appropriately grasp the image’s contents. The images are filled with meaning by the voice-over’s vivid storytelling performance. Notable as a chorographic detail is also the map that is referenced on each page, which overlays current-day Cardiff with its historical layout, showing where rioting took place and where we might find traces of it hidden in Cardiff’s contemporary urban fabric. All in all, Riots Redrawn thus wonderfully combines detailed documentation with a performative reconstruction of a history whose traces are increasingly effaced as the cityscape keeps changing and time’s arrow marches on.