“From Linelanders to Geographers of Thought” – Laura Jimenez Rojas

The first TiM session of 2019 had a great beginning. The guest was the anthropologist Tim Ingold. The talk was about “On Doing Undergoing: experience, imagination and the principle of habit”. We had the opportunity to have a glimpse of Ingold’s phenomenological approach in the context of his “dwelling perspective”. The guiding question for this session was: how to distinguish bodily automatism from the practised mastery of a craft?

Ingold departed from a critique on the theories of embodiment. For him, these theories, such as Polanyi’s “tacit knowledge”, have failed inasmuch as they have limited the analysis of habitual practices in a sense of knowledge that is like “sunk into” the body. Seeing that, Ingold changes the perspective from the classical humanistic theories of embodiment to the premise that life is an endless process of self-making, of becoming.

The “becoming” is an idea that Ingold nourishes with different approaches as well as concepts. Here, I want to focus on one: “correspondence”. It is a concept that is influenced by the philosophy of John Dewey. Particularly, the thinker draws a connection between the words “communication”, “community”, and “common”. This is relevant for Ingold since it points to the possibility of social life. The concordance among these words are the bases for what Ingold calls “interstitial differentiation”. It is a going along together. It is a contrapuntal relation of the form “with”, rather than an additive relation of the form “and”.

To explain it, Ingold referred to the act of playing an instrument, where the cooperation between the instrument (its materiality) with the body (gestures and poses) creates an always-in-formation process: the production of sound. Furthermore, this can be extended to the understanding of habit, where it is not a settlement but a movement. For Ingold, following Dewey, we are continuously in the “life-process, in which – in the things we do – we perpetually shape the conditions under which both we and those who follow us, and to whom we relate, will live together in the future.” (Ingold 2016, 15). This movement is the undergoing of doing. 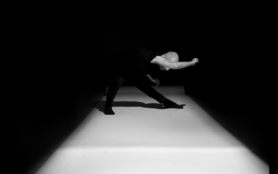 Another way of understanding this approach is through the work of the artist Jaime Refoyo. Ingold mentioned him as the artist who taught him how to draw a perfect straight line by using the body. At first, when Ingold called upon the idea of a “perfect line”,  the linelander of Edwin Abbott’s Flatland came to my mind, to whom “[o]utside his World, or Line, all was a blank to him; nay, not even a blank, for a blank implies Space; say, rather, all was non-existent.” (Abbott 2006, 70). However, going back to Refoyo’s use-of-body or as he calls himself a “Geographer of Thought” the body movement is the space-genesis for the pictorial world. Refoyo has developed a performance-technique called GEOCOCO in which (straight and curve) lines emerge from the encounter of the body-hand-pencil- and the surrounded space.

It is in this interstitial differentiation where another kind of ontogenesis of a line can be understood. It is in this process where creativity lies, as it “is to focus not on abduction but on improvisation. It is to track the ways along which the maker of the work follows the materials with which he or she is engaged.” (Ingold 2014, 129). This is all to say that transformation and creation are always within, it is a becoming that, in experience and imagination, as Ingold says: is neither a relation of one not two, nor the relation of the two, but the “in-between”.