The last seminar by Nathalie Sinclair made me think about the relationship between mathematics, gestures and the role of our bodily movements in doing, learning, understanding mathematics.  Discussing the current position of touch-screen technologies, from the case of TouchCounts– an application Sinclair developed for mainly performing multiplication- we went on to think about multiplication as an experience as we touched upon the theoretical considerations that arise from the use of haptic technologies in doing and learning maths.

Having a complicated relationship with mathematics during childhood myself, the relation between gestures and doing maths, or more specifically doing multiplication, has lead me to view my learning process in elementary school as relying foremost on memorising the multiplication table, which is distant from experiential learning. On the contrary, gestures are, as we discussed in the seminar, essential in doing mathematics and can be traced back to the Ancient Greeks. The Greeks have performed mathematics; multiplication and doing maths was more experiential and material as they have used their hands and counting devices rather than merely writing mathematical operations.

Every time we do mathematics, indeed, we engage with or learn to use new technology, whether it be the pen and paper, board and chalk or more curiously now the digital technologies. Gestures are now transferred on the screen while doing mathematics with haptic technologies. In this sense, multitouch devices can introduce new mathematical experiences and new and affective ways of learning as well as bringing about theoretical considerations related to the materiality of maths.

Even though mathematical operations and procedures are viewed as immaterial, as it seems, the mathematical actions or operations occur in the virtual space of thought. In other words, they happen as disembodied thoughts; they link to physical movement and our body gestures (Rotman, 2015). Rotman further questioned “the link between the movement of abstract mathematical thought and physical movements of the human body”. This questioning carries us to the connection between movement, gestures, aesthetics and mathematical representations. 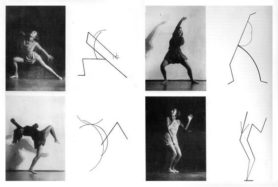 Diagrams were used to explain the relationship between the “actual” and the “virtual”, as well as to explain what it means to do mathematics by Chatelet. The relationship between diagrams and gestures has been an essential part of his work. Chatelet looks diagrams and gestures as representations of abstract mathematical concepts, and his thinking has also influenced later research. Thinking on these relationships, in a way reminded me of Kandinsky’s diagramming of Gret Palucca’s dance movements (Figure 1). Kandinsky translated photographs of dance movements into geometric shapes and lines, creating a diagrammatic form of bodily movements. Looking at these abstract and geometric representations of the physical movement and gestures I will conclude with adding that our bodies intrinsically carry out, experience and perform mathematics and further with digital technologies we discover new ways of representing, experiencing and learning.