What does it mean to go beyond representation when we think about atmosphere? Is not atmosphere a “celestial body” composed of nitrogen, oxygen and argon as described by science?

Based on a thought of “affirmative critique” McCormack proposed an approach to experience, in which it is absolutely necessary to think with and, at the same time, see it as a process that needs to be expanded to the participation of non-humans.

That point of departure is inspired by different sources. There are two that I found really interesting: John Dewey and William James. These authors come from the philosophical tradition of pragmatism, where concepts as “action” and “experience” are key to think other ways of knowing. For McCormack this was a fundamental point, in view that these thinkers identify experience not as the dualism of “being represented” and “representing”, but rather as relations in transition both in space and time.

Moreover, they connect experiment to experience on behalf of the movement of ongoing testing in a concrete spatial dimension – for James in poetry and for Dewey in pedagogy –  that results in experience as a kind of minor experimentalism.

In this way, particular events and moments may lead to other ways of knowing. In the case of atmosphere, as an alluring concept, the approach can be done by exploring the possibilities it can open when it seems to refuse to reduce any sense of experience to the individual level, McCormack said, as if “there is something enigmatic to think”.

Interestingly, the question about what is atmosphere is now on ontological terms. It can be thought as an object, an entity or even as a process. It is the relation with the perceiver what can bring forth an understanding of its “nature”, but how? McCormack highlights the need for an expanded sense of empiricism, using the balloon as an speculative device. 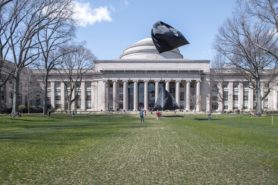 Amongst the examples brought to the seminar, I found particularly evocative the Aerocene (Saraceno, 2018). It is an “atmospheric experiment” by the artist Tomás Saraceno, where a solar balloon works as an sculpture-device that allows to re-imagine the possibilities of moving in the air and of thinking in other forms of life.

The Aerocene that McCormack showed us was a gigantic black balloon in the middle of MIT campus. He called it “a minor object for collective experimentation” bringing back Dewey’s concern on pedagogical spaces for experience, only with the difference that in this case it was about “something” that in its apparent absence could tell us more about our presence, within a world where the “celestial body” may have the potentiality to withdraw from us other ways of imagine, perceive and relate with others -humans and non-humans-.